March 31 — Another secret stream, secretish, anyway. The last time I named it I got a lot of squawking from self-righteous nimrods who should know better.

Well, bite me, self-righteous nimrods. (Which would be a good name for a rock band, incidentally.) It’s Sages Ravine, truly in the Northwest Corner of Connecticut, and accessible only via a half-hour hike from the top or from an unmarked pulloff on a state road below, with room for two cars if they are small.

The winning combo today was a bead head black Wooly Bugger, size 12, and a Deer Hair Sedge (light and dark, sizes 16 and 12) up top. I also used a brown Wooly #12, a Copper John #14, and sucker spawn #12 with success, but nothing was as consistent as the black Wooly and DHS.

The fish chewed all the hackle of the Wooly (see photo).

I saw a caddis — at least it looked and acted like a caddis — hit the water and start skittering around. A brookie of some heft shot up and gulped it.

So for the last half hour I imitated that behavior with the DHS, large and small.

I also offer my first 2016 entry in the exciting “Aaagh Snake!” series of photos, which features pictures of inanimate objects that look for a moment like a giant evil nasty snake. Previous entries have included lengths of garden hose, fan belts, and, like today, roots. 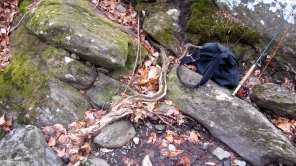 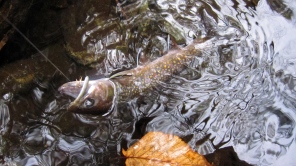 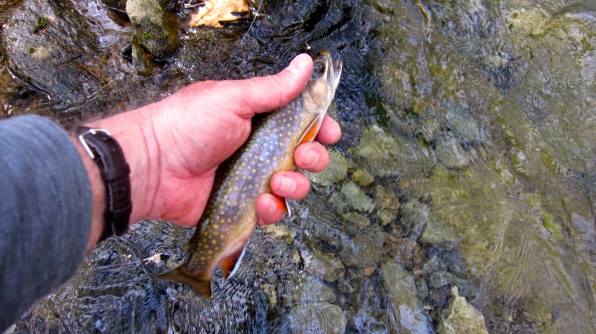