The Hendrickson hatch has begun in Northwest Connecticut, and the other night I was fishing single dry flies and catching mostly stockers on the Blackberry River in East Canaan.

I also made the acquaintance of a truly large rainbow trout, which I have named Mongo. (I name all large fish Mongo. It’s simpler than thinking up new names — Hercules, Samson, Ralph — and trying to remember them. Plus I am almost 100 percent certain the fish doesn’t care what I call him.)

The pool in question is right above a breached dam, and a favorite spot for bait and spin fishermen. I usually skip it, but as I walked by I noticed the large number of trout holding and the presence of Mongo, who left my bank as I strolled by and swam lazily into a different lie.

So I went out in the pool, expecting every fish to scatter. They did, but came back quickly enough.

Except Mongo, who settled in about ten feet away from me and yawned at my offerings.

I bumped the damn fish in the face with a nymph and he shrugged it off.

I photographed him, sort of, with the point and shoot through my sunglasses. Not ideal, so I have added a helpful red oval around Mongo.

He’s a big one. I have since witnessed two slingers hook Mongo and fail to land him. The second time it was a pair of guys who failed, largely because they wouldn’t get in the water. For the price of wet feet, they could have had a trophy trout.

But Mongo is still with us, and thank goodness for that. 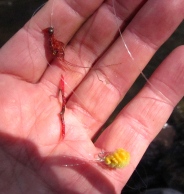 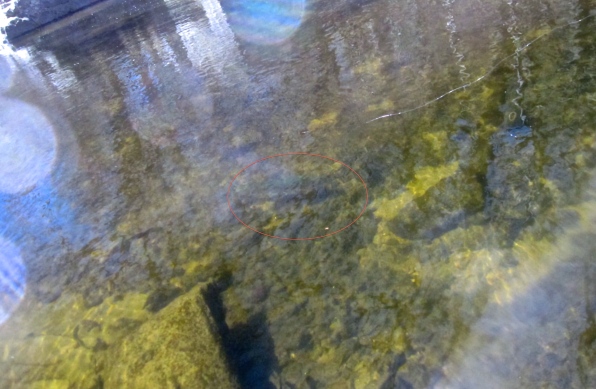 Notes: The Blackberry is heavily stocked and heavily fished. The stocked brook trout responded particularly well to my “Meat Lovers” trio of sucker spawn, San Juan worm and crayfish. As the season progresses, most of the stocked trout will be hauled out and the net will show stream-bred and/or holdover rainbows and browns. These fish will be in the less accessible stretches of the river, which are a pain to get to and not that easy to fish, with a substantial canopy and extra-slippery rocks that make wading difficult.