Here is the Hobo and his shotgun

Amazon Prime, aka The Mother Lode of Crap™, has the immortal Rutger Hauer in a 2011 straight-to-video piece of futuristic shlock called “Hobo With a Shotgun.”

Rutger is the Hobo. There’s the Drake, the criminal boss of Fuck Town and his two sadistic sons, Slick and Ivan; there’s Abby, the hooker with a heart of gold; and there are two guys dressed like scrapyard knights of yore called the Plague, for some reason.

So the boys irritate the Hobo who gets a magic shotgun that never ever requires reloading and starts cleaning up the town but the cops are corrupt too so that’s a problem and there’s some plot and lots of blood and pretty much everybody dies and if they don’t die they lose important parts of their personal bodies.

Here are Slick (right) and Ivan. You can see why you might want to shoot them.

Academy Award nomination for Rutger Hauer, when he says to the blood-soaked hooker, “Lemme walk you home.”

Here’s Abby, before the bad guys do icky things to her

And because this is a Canadian flick, ice skates take on sinister significance.

It’s an absolutely dreadful film with gallons of gore and lots of screaming and a lot of sideways hand-held camera shots. 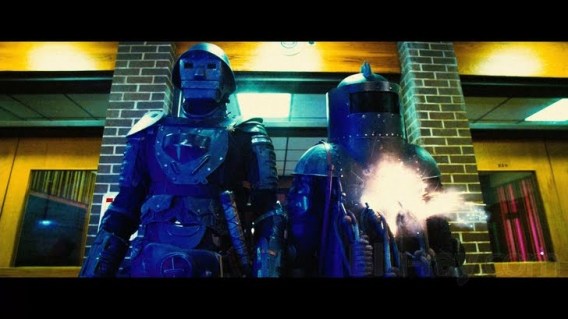 These guys are called The Plague. It is never explained and nobody gives a shit.

“Hobo with a Shotgun” has no redeeming qualities except one — it’s short.

So I give it a heartfelt two coils for getting the job done, not taking too long about it, and providing for Rutger Hauer’s old age.