It never gets old.

This guy put on a nymphing clinic at the Elms area on the Housatonic one morning last week. Bam bam bam, one after another. None of the fish seemed particularly big, but I was on the other side of the river.

My contribution to the morning’s festivities was three of these rainbows, which I suspect are part of the stocking project run by Housatonic River Outfitters. 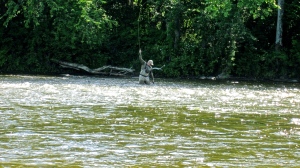 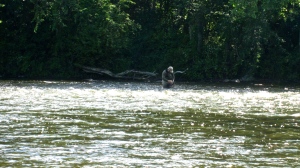 One of the rainbows took the larger of the two crayfish imitations shown here, next to an actual half-dead crayfish (missing a claw) for comparison. As the summer progresses and the Housatonic angler’s attention shifts over to smallmouth bass, these patterns become very useful.

Here is a guide boat setting out, same morning. The young man waving the rod around announced, “I’m gonna shpank da bank.” I don’t know what that means. 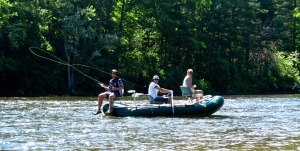 Meanwhile, back in Phoenicia, N.Y. and environs, the beavers are beginning work on an obstruction in Woodland Valley Creek, at the Roxmor Colony pool.

Mud, in a word. Better to scootch through the woods. Do not string up your rod until you get to the stream; if you try to go through the thick woods carrying what amounts to a long stick with string on it, you’ll be there forever.

Using my exciting method of grabbing the first rod that comes to hand, I set out with my father’s old 8 foot 6 weight Orvis graphite “Trout” model. (Today Orvis uses all sorts of clever marketing strategies with impressive-sounding names — the Helios rod line, the Zambesi jock strap. But back when they first started making graphite rods, they were called “Graphite” and then a descriptor of some kind, like “Trout.”)

The winning ticket turned out to be a three-fly rig with an Madame X Caddis on top and a succession of nymphs on the two droppers. The double bead Prince was the subsurface favorite. At one point I caught six smallish browns on twice as many casts. Silly fish.

As I made my way upstream, past a long flat, the stream narrows and there is a nice deep run that I always fish from the right bank looking upstream. On this day, however, I decided to be bold and innovative and creep up the vastly less hospitable left bank, where I discovered a nifty spider web that I did my best to photograph, with mixed results.

I also got into position to put my cunningly-constructed three-fly rig right over the giant brown trout I was sure lurked beneath a downed tree.

OK, so it wasn’t a giant brown trout. It was a medium brown trout. He was lurking, though, and it is unlikely he would have risen like a rocket from the depths had I been casting from my usual spot on the opposite bank.

As is often the case with my cunningly-constructed rigs, the fish ignored the tempting Prince nymph, and the delicious and appropriate green caddis larva. Instead it glommed on to the absurd Madame X, which is on the rig mostly as a convenience for me.

If you are concerned about the general welfare of fish, be assured that this one was on his way ten seconds after this photo was taken. 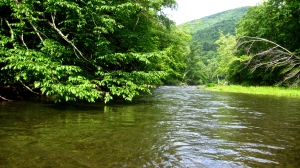 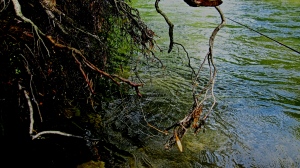