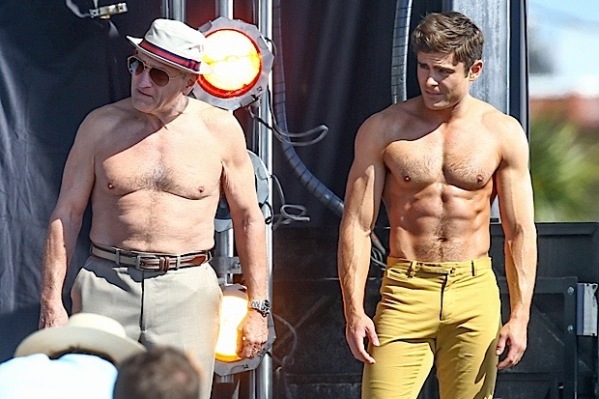 I love bad movies. I admit it.

A giant man-eating shark/octopus hybrid that terrorizes a Mexican beach resort for no particular reason? Sign me up.

A sword and sorcery flick, made for about $11 and featuring the worst sword fight in cinematic history, plus an evil warlock dressed up like Gloria Swanson in “Sunset Boulevard”? I’ll buy the 30th anniversary DVD.

But even someone with an advanced degree in bad taste will have a problem with the latest entry in the “Let’s Infantilize the Elderly” sweepstakes, a wretched piece of dog doo called “Dirty Grandpa,” currently infesting a theater near you.

And everybody else’s butt. There are a lot of butts in this film.

That’s the best thing to report.

The idea is that Dick Kelly (DeNiro) crotchety old guy, has just lost his wife to cancer, so naturally he convinces his grandson Jason (Efron) to take him to Florida.

Hilarity is supposed to ensue.

The high point is a spring break party. This is also the low point. The net effect is to make eternal celibacy look like the only sane option.

Although Kelly having an intimate personal moment while watching pornography is pretty bad. And it says something about this film that somebody — director Dan Mazer, screenwriter John Phillips — thought it was funny.

I was under the impression that somewhere in the process of making a big feature film, with a big star, some rational adult casts an eye over the production and makes a decision — thumbs up or thumbs down.

Or, in the case of “Dirty Grandpa,” a thumb jab in the butt.

How any sentient being could give this thing the green light is beyond me.

Even  gross-out humor, something, somewhere has to be funny. A constant spew of unfunny material does not add up to a funny film.

It does add up to a headache and a resentment at having 102 minutes of precious life shot to hell.

Here are some suggested activities that would be much more fun than seeing “Dirty Grandpa”:

1. Join the Church of Scientology and then try to defect.

3. Binge-read 30 years’ worth of back issues of The New Republic.

4. Take a lot of amphetamines and watch a presidential debate with the closed captioning on.

5. For the month of February, have someone strap you to an uncomfortable chair with a continuous loop of Jefferson Starship’s “We Built This City” playing at top volume