I was given a Temple Fork Outfitters Tenkara rod (the 10’6″ Soft Hackle model) for my birthday, and it remained in the wrapper until the giver was around to show me what to do.

I have since deployed the thing with great success on the Housatonic River, mostly for smallmouth bass.

I also bought a smaller one for use in small trout streams.

It’s a fixed-line rod, no reel, and it telescopes out. When in the closed position it’s easily stuck in a day pack.

Backpacking anglers love them. So do more sedentary types.

Meanwhile giant snakes are everywhere, especially on the Housatonic. It’s so warm and dry that even the snakes need to cool off.

So fishing upstream of the Amesville Bridge, on heightened snake alert, I beheld an enormous serpent.

But it was still a big snake, just hanging around waiting for some oaf like yours truly to come blundering by.

Also upstream of the bridge, a comprehensive effort by those mysterious Rockpile People.

I see this everywhere I fish — rocks arranged in piles, for an unknown purpose.

These intrepid Rockpilers braved the evil serpents and put up a whole mess of them.

And finally, first trip on the Lower Lake on Mt. Riga with the pontoon boat. The TFO rod landed my first big largemouth of the year, as well as a fairly hefty crappie. 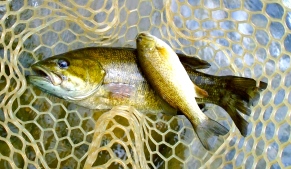