Okay, progressives. Time to snap out of your Donald Doldrums with a truly inspiring film, Zombi Holocaust, which if made today would have it’s own GoFundMe page.

This tells the inspiring story of how the indigenous peoples of the Mollucan Islands reclaim their heritage from the white cisgender patriarchy.

Zombie vs. outboard motor. Typical use of technology to oppress the masses.

See, someone is swiping body parts from the recently deceased at a New York hospital.

Lori decides to go with Dr. Peter Chandler to the islands to investigate. They bring along the boorish misogynistic racist George and investigative journalist Susan. George, always problematic, insists on calling Susan “his” “girlfriend,” like she’s his, like, property.

They all go the wrong island because everybody assumes that their Mollucan guide Mollotto understands Western maps, which completely disregards the indigenous people’s holistic understanding of their environment. 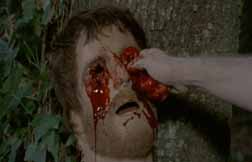 There they find cannibals and, later on, zombies, who are all victims of the typical white mad scientist Dr. Obrero, who in spite of his Hispanic heritage is just another agent of the hegemony.

George gets his eyes poked out and eaten, which is entirely justified because he was looking at Susan like he was his, like, property.

Susan is carried away by the cannibals who unfortunately bring her to Dr. Obrero for some completely coercive neuro-surgery and haircut.

An alt-right zombie, doing only what his Fuhrer commands

Despite being deprived of their Western weaponry and thus powerless to spread oppression, Peter manages to set Dr. Obrero’s operating barn on fire.

Meanwhile Lori is privileged to be the guest of honor at the cannibals’ sacred ritual. They lovingly paint flowers on her, prior to having her get into a completely indigenous altar thing, prior to the sacrifice.

Lori doesn’t make a sound. She is clearly willing to give her life to make up for thousands of years of white imperialist oppression against all peoples of color.

But the altar suddenly levitates and the democratically-elected leader of the cannibals sings a sacred song to signify that they must all go to the barn and kill the doctor.

Lori, about to make amends for centuries of oppression

Peter escapes and joins Lori, who has somehow acquired a dress. They watch as the cannibals reassert their indgenous and completely organic pride.

Obviously, the cannibals represent the misguided Trump voters, who ignored their own socio-political interests to vote for Dr. Obrero.

The zombies are the alt-right, capable only of obeying Dr. Trump’s orders.

The other characters are archetypes of an exploded and archaic fascist system.

It’s amazing that this prescient film was made by Italian schlock director Marino Girolami in 1980 on a budget of $87.

There are several scenes of Lori naked, which serve to illustrate her strength in the face of the hegemony. Especially the garter belt.