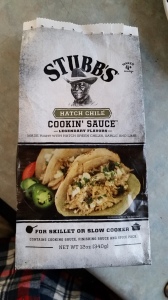 When I lived in New Mexico I became addicted to chile with an “e” — not the jumped-up spaghetti sauce with beans in it that calls itself chili with an “i.”

Green chile and chicken is a particularly good combination. In Connecticut, there is no shortage of chicken, but green chile is a rare commodity. The stuff can be sent, frozen, from Albuquerque, at hideous expense. I have not been willing to incur this expense.

So that’s been that.

Until now. This line of “cooking sauces” recently appeared at LaBonne’s in Salisbury. I tried the barbeque one for ground beef, and the green chile for chicken.

The beef one produced Sloppy Joes that were perfectly edible. The chicken version, however, gets as close to being in the Land of Enchantment as possible.

I highly recommend it.

Of course, the depiction of “Stubbs” is racist and evil. The fact he is wearing a cowboy hat indicates he is, at best, the cook, and probably a slave. So if you want to try this you’d better hurry because my next move is to have this product banned.

Meanwhile, on the trout torturing front…whoops

Meanwhile, I cleverly broke the tip of my Orvis “Trout Bum” rod, a slow action, four piece seven foot four weight that is one of my favorites for creeping around small streams. I broke it by rolling the tip up in car window because I was lazy and and did not break the rod down and put it away properly.

Orvis has a 25 year warranty. If you break it, however stupidly, they will repair or replace it. They do nick you for $30 to cover shipping, however.

So I sent it off back in April. The first thing they did was offer me an upgrade to the super-super version, for a mere $375. I passed on that, and silence intervened until yesterday, when the UPS man — whoops

— when the UPS delivery person of indeterminate gender and sexual orientation (not that it matters anyway) delivered a brand spanking new version of the same rod. Why it took two months to figure out they couldn’t fix the old one I don’t know.

But I am not complaining. I just tested it out with a double taper line and it is just what the doctor ordered.

I would prefer the nylon-covered tube, because when you are backpacking to a high mountain lake in northern New Mexico you really don’t want a lightning rid strapped to your pack.