With nothing else to do except watch meaningless college football on TV, I went fishing on Saturday, Jan. 2.

“Wait, what?” you exclaim. “Isn’t it cold and snowy? Aren’t the streams iced over?”

The answers: Yes, a bit; not really; and no.

We had a minor snow storm last week that dumped at most a couple of inches of slushy stuff, and it is pretty much gone.

The Housatonic is running high, but the feeder streams are in nice shape.

And of course the Farmington is a year-round river with a regulated flow.

I chose to clamber up Sages Ravine and throw little streamers at brook trout. Big streamers, too.

And in the eternal quest to do things in an unorthodox manner, I rigged up a three-fly cast with a Madame X at the top and two bead head size 12 Wooly Buggers (olive and black) beneath.

That wouldn’t be remarkable except I was using a seven-foot four-weight rod in a itty-bitty mountain brook for itty-bitty wild trout.

Later on I used a bigger streamer and hooked (but did not land) a substantial fish for this water — maybe 10 or 12 inches.

Soon enough it will snow and make this sort of thing impractical, but it sure was fun to get out on the second day of the year and catch fish. 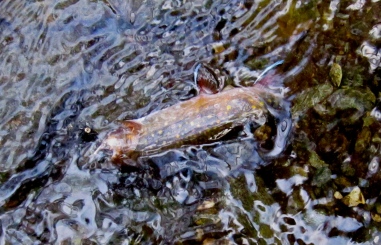 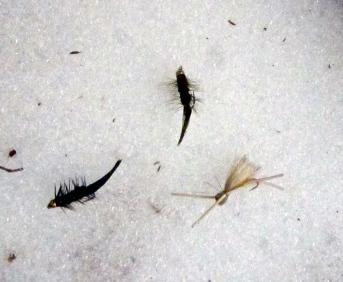